Go back a day
Highlight an Outlet:
Choose your preferred news outlet to have their stories displayed first in each news section.
Trending topics derived from 1645 headlines via 36 feeds

Trump Administration Sends Out Notices Of $500,000 Fines For Those In U.S. Illegally - NPR News

The Point: The hugely inappropriate weekend of Ivanka Trump and Donald Trump Jr. - CNN US

Analysis: Donald Trump is staging a 4th of July takeover - CNN US

Yes, there will be tanks at Trump's Fourth of July event ? but there's a catch - CNN US

Tanks, flag burning and the Trump baby balloon: What we know about the July Fourth parade - USA Today Top Stories

NASA completes key test on Orion, the spacecraft Trump wants to take astronauts to the moon - Washington Post US

What could go wrong for Trump on the Fourth of July? In 1970, protests and tear gas marred the day. - Washington Post US

Fact check: Trump told the troops he gave them their first raise in years. He didn't. - CNN US

Trump wants to strike fear in anyone who might investigate or expose him, and it's working - USA Today Top Stories

Fox Exclusive: Trump warns Iran; Plus, outrage after AOC claims women at border forced to drink out of toilets - Fox News US

For reasons good and bad, Donald Trump seems to have an affinity with Kim Jong Un - USA Today Top Stories

E. Jean Carroll's book is out. What to know about her allegation of sexual assault by Donald Trump - USA Today Top Stories

Schumer: Trump entering North Korea to meet with Kim 'one of the worst few days in American foreign policy' - CNN US

In praise of shame: how Trump and Johnson show we need it more than ever - The Guardian World News

For China, a growing conundrum: What to do with Hong Kong? - Washington Post World

Opinion: A rottenness at the heart of the Border Patrol - CNN Top Stories

Mexico says migrant apprehensions at U.S. border down 30% in June from May - Reuters Top Stories

Fox Exclusive: Trump warns Iran; Plus, outrage after AOC claims women at border forced to drink out of toilets - Fox News US

Mexico says migrant apprehensions at U.S. border down 30% in June from May - Reuters World News

Mexico says migrant apprehensions at U.S. border down 30% in June from May - Reuters US News

Expand all 32 stories like this...
Show all stories
More Stories
#4
U.S. defeats England 2-1 to advance to Women's World Cup final

England gave the defending champs all they could handle, but the US won 2-1 to earn a spot in a third consecutive final - CNN Top Stories

Expand all 33 stories like this...
Show all stories
#5
France warns Iran against further breaches of nuclear deal

Iran fires back at White House over claims it has been violating nuclear deal for years: 'Seriously?' - Fox News World

Expand all 31 stories like this...
Show all stories
#6
Navy SEAL acquitted of murder in detainee's death 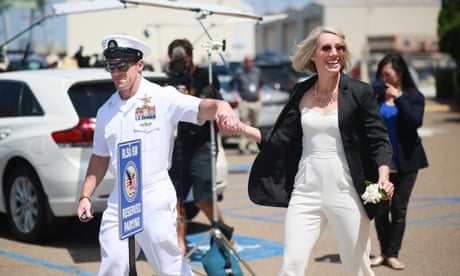 Expand all 23 stories like this...
Show all stories
Saturday

NY Times? Mara Gay claims the ?consequences? of the Supreme Court ruling on abortion ?are going to be death? - 44 similar stories

After Supreme Court rulings, celebrate July 4th and our democracy ? not mourn for America - 22 similar stories